Banqer through the eyes of Tiger

Tiger missed the first day his class used Banqer. He was pretty unimpressed about this when he first found out, but he soon found that this was to his advantage.

While he had been off school he had effectively being saving his income, while his classmates had already started spending theirs.

Tiger’s in a combined Year 5 and 6 class, and controversially (in his eyes anyway) the Year 6’s are paid more Banqer Dollars ($1,000) than the Year 5’s ($750) for their weekly contribution to class. This is intended to reflect that in the ‘real world’ those with more job experience are paid a higher wage, however Tiger see’s it as unfair because they have to pay the same bills. Luckily, for Tiger though one day he’ll be Year 6! 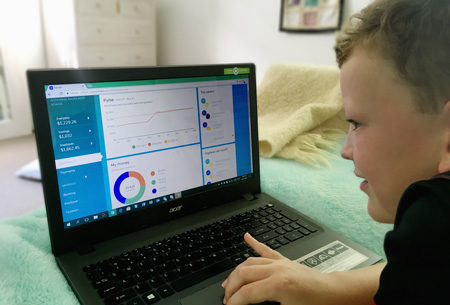 On top of the base level income Tiger and his classmates earn for coming to school, their class also has a thriving career market. Tiger’s job is the Library Collect Monitor. This see’s him being responsible for collecting up the library books and returning them to the library. While it’s not the highest paying job in the class (that’s the Accountant who makes sure everyone is paying their bills) the low level of work required in the role, and subsequent work life balance, lead to it being a sought after position. Job applications were therefore required where Tiger and his other hopeful classmate applicants outlined why they’d be good at the job and the skills they have which make them the perfect fit.

Like in the ‘real world’ Tiger and his classmates also have to pay bills. They pay for desk and book storage rental, but more importantly, they also have to make a general bill payment for the educational content they receive from their teacher! While Tiger thinks that “[they] shouldn’t have to pay bills, they should just take it out of what they pay [them]’, this is again designed to more closely mimic real life.

Initially Tiger wasn’t a big fan of KiwiSaver, “it just takes your money and makes it harder to save”. However as Tiger’s comprehension of KiwiSaver increased, unsurprisingly, so too did his appreciation of it. And while he’s always been a bit of a risk taker, choosing to opt into a Banqer high risk fund, he’s now increased his Banqer KiwiSaver contributions from 4 to 8%.

By his own account the lessons Tiger has learnt through Banqer have also transpired into his home life. He’s always been a saver, but this has ramped up since he began using Banqer (and so to have his savings targets).

Tiger enjoys using Banqer as he gets to “learn about money like it’s the real world”. After talking to Tiger for a bit it doesn’t come as a surprise that his favourite part of Banqer is is earning and saving his Banqer dollars. Generally he saves his Banqer Dollars for his classes’ end of week auctions. These auctions generally include a few sweet treats, Tiger tells me he once paid $1,400 for one Fruit Burst, and furniture passes ‘where you can kick people off furniture if you want to sit there’. Right now, however, Tiger’s got his eyes set on a bigger prize - the end of term auction. He’s got big expectations of what might be on offer, and based on the amount he paid for a Fruit Burst during the year, he’s wise to start saving early.

Download the pdf
Register as a Teacher
Join your school, create a class. We're here if you need
any help.
Forgot password