Obviously the main reason that Banqer was developed was to build the financial capability of today’s youth. When I used Banqer with my class, I found that an unexpected benefit was my personal understanding of financial concepts improving, particularly to do with superannuation.

This may just be in my friendship circle, but I feel as though superannuation isn’t something that’s discussed very often. Maybe it’s because certain people think discussing finances is a private issue, but I think it has a lot to do with retirement seeming too far away to worry about now. My dad has been trying to change my view on this since I started full time work in my early 20s, but it wasn’t until I was almost 30 that I finally realised what he was talking about was actually important.

When I introduced the Banqer superannuation module to my keen Year 6 students, I wanted to make sure I had more of an understanding of how it works in the real world before I got any curly questions from inquisitive kiddies. So I set about doing some research to build my knowledge. You may be aware, but one of the first places I always start when doing financial research is ASIC’s moneysmart website as it explains things in an easy to understand way.

In my research I then found myself comparing superannuation funds on a comparison website like Canstar. I quickly discovered that the fund I was with wasn’t giving the best returns, nor was it charging the lowest fees. Why should I be loyal to them? I didn’t even choose them in the first place, my naive 23 year old self just went along with what my employer recommended when I started there. So I started the fairly easy process of swapping providers and consolidating my accounts (it involved filling out an online application for the new fund and a form for them to organise my money to be transferred across).

Obviously I told my dad this news and he was very happy for me, a few months later, this conversation happened: 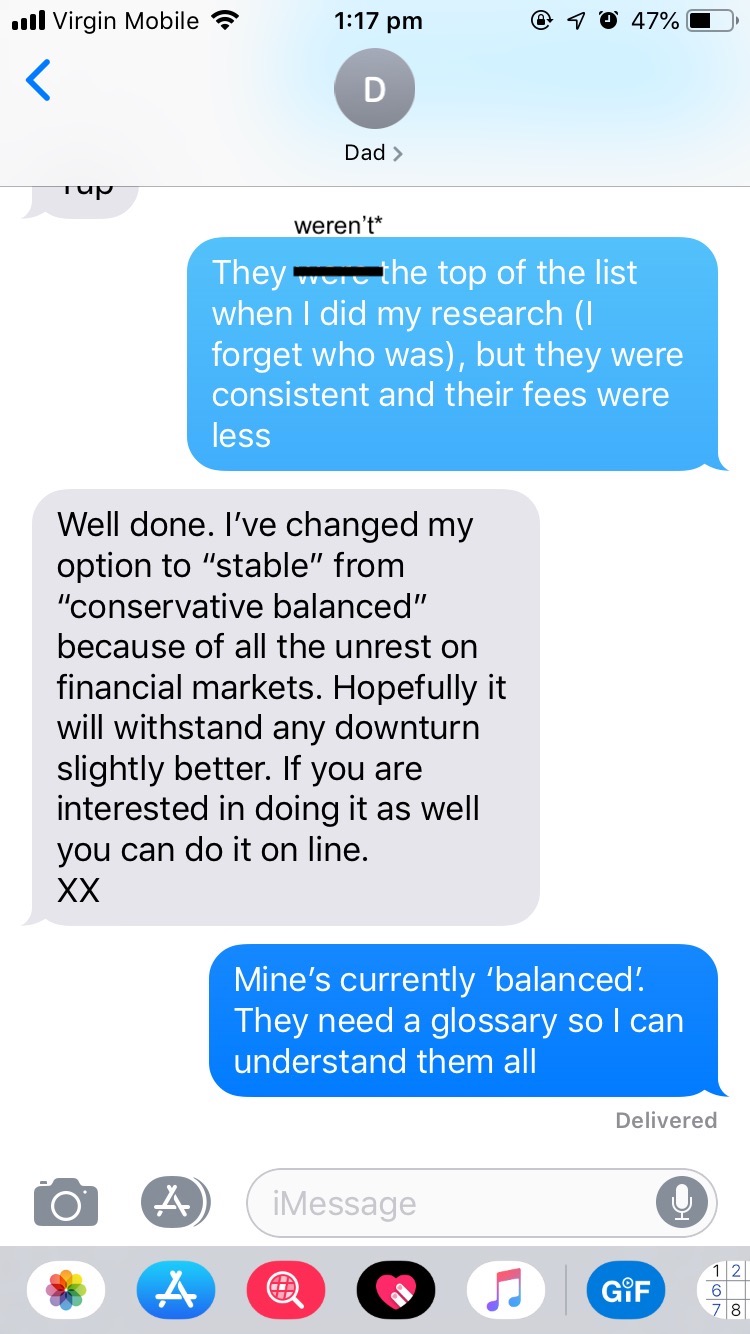 He was telling me I should look at how my money was being invested by my fund, as the market had taken a slight downturn (just so you know there are several glossaries available that I discovered after sending him the second text). We then discussed the benefits of each option and compared the results based on the fact that I am in my thirties and my dad is semi-retired. FYI, I kept mine in the ‘balanced’ option as the results appeared the most consistent over time and obviously my money will be in there for much longer than my dad’s.

Recently I was visiting a friend who had just purchased her first home with her partner and decided this was as good a time as any to start having financial discussions with my friends. I told them my superannuation story and another friend shared that she had just had a discussion with her parents about their wills. This led us to realise that we’re in a new stage of life that involves owning property and having children so we probably need to start thinking about writing our wills too. It was an honest and thought-provoking discussion that broke down barriers and will hopefully lead us to have more open discussions about finances in the future.

What’s my next step? Looking into the benefits of salary sacrificing into my super and actually doing it! (And then maybe I’ll face my age head on and write my will).